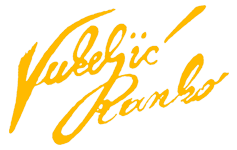 Artist, Ranko Vukeljic, till now has spent his whole career in Australia where he has developed his skills as a painter. With Vukeljic’s return to Serbia, his country of origin, he has brought a collection, which has a clear conceived and defined concept. The concept of Vukeljic’s paintings is understandably a realistic interpretation; although, his style is not that easily defined. When viewing the visual space and subject matter, Vukeljic’s convincing portrayal of realism is extraordinarily unrealistic. His very individual composition and iconography come from his imagination and not interpreted from any sources, which creates an intimate and subjective motive in his paintings.

Therefore, Ranko Vukeljic’s paintings portray a sense of longing, where his existentialist motives are seen throughout his work. Vukeljic is able to artistically express this through his aesthetical and ethical outlook. Therefore, his paintings are exclusively a refuge to his artistic ideas by a “clean” authentic painting that is based on realistic principles.

Where in fact Vukeljic compositions do not need to insist on a recognizable geography, the paintings posses their own perception and focus on their contextual features and meanings. The landscape hides an existential drama; where it is not specific to Australian, Bosnia or Serbia geography. Furthermore, the paintings hold symbolic meanings, such as, the destroyed architecture, which is seen regularly throughout the collection.  The symbols from folk and ethnographic motives are recognizable; also the Cyrillic letters are placed on the destroyed walls.

Ranko has expressed his concepts through painting by his artistic ability to invite the viewer into his own space and soul.

Ranko Vukeljic’s realistic paintings are defined. This is seen through his subject matter and figures, which have a calm static essence. The technique shows no signs of heavy gestures but rather well thought out strokes, which overall creates a well-structured painting, like a well written paper or a well constructed peace of framework, which is aesthetically pleasing and coherent. Another important feature of Vukeljic’s paintings is his color choice; it is “controlled” and articulates his expression.

Vukeljic, through his paintings, does not want to protest rather understand his journey as an artist and to follow his own destiny. Consciously, as an artist, Vukeljic wanted to suggest that he might have some answers. With this in mind, without any unnecessary exhibitionism, Vukeljic would rather an Arcadian landscape. The images give spiritual peace to avoid the dangers of life. At the same time, this type of art has long lasting connotation. As Mjecislav Porempski said, “Modern man is surrounded by a vast amount of technology and artists have adapted this”. It therefore can be said that the viewer is surrounded by moving pictures from televisions and computers. Artists too have been influenced and have become a product of the virtual world. Therefore, through digital manipulation photographs and film have lost their dignity.

Paintings, which are done by hand, seem to be from the heart and of the soul. This reflects the human spirit onto a two dimensional surface. For this reason, we should trust Vukeljic’s paintings. In his work, he produces personal and a universal meaning, which reflects the time we live in. In complete, Vukeljic has a poetic and realistic definition towards his painting and with this we cannot wait to see what else will come out of his workshop.